This is the granary… Just one of the many barns that we have around the property. You can check them all out here if you want.

When we first moved into the house, the granary was the first barn that I had my eye on. It needed some love, having been neglected for some time and not actually being used as a functioning barn. The local squirrels had since claimed it as their own, storing discarded walnut shells between the studs and generally making a mess of everything. It was a catch-all for various christmas decorations and all of the other things that we didn’t have a place for. 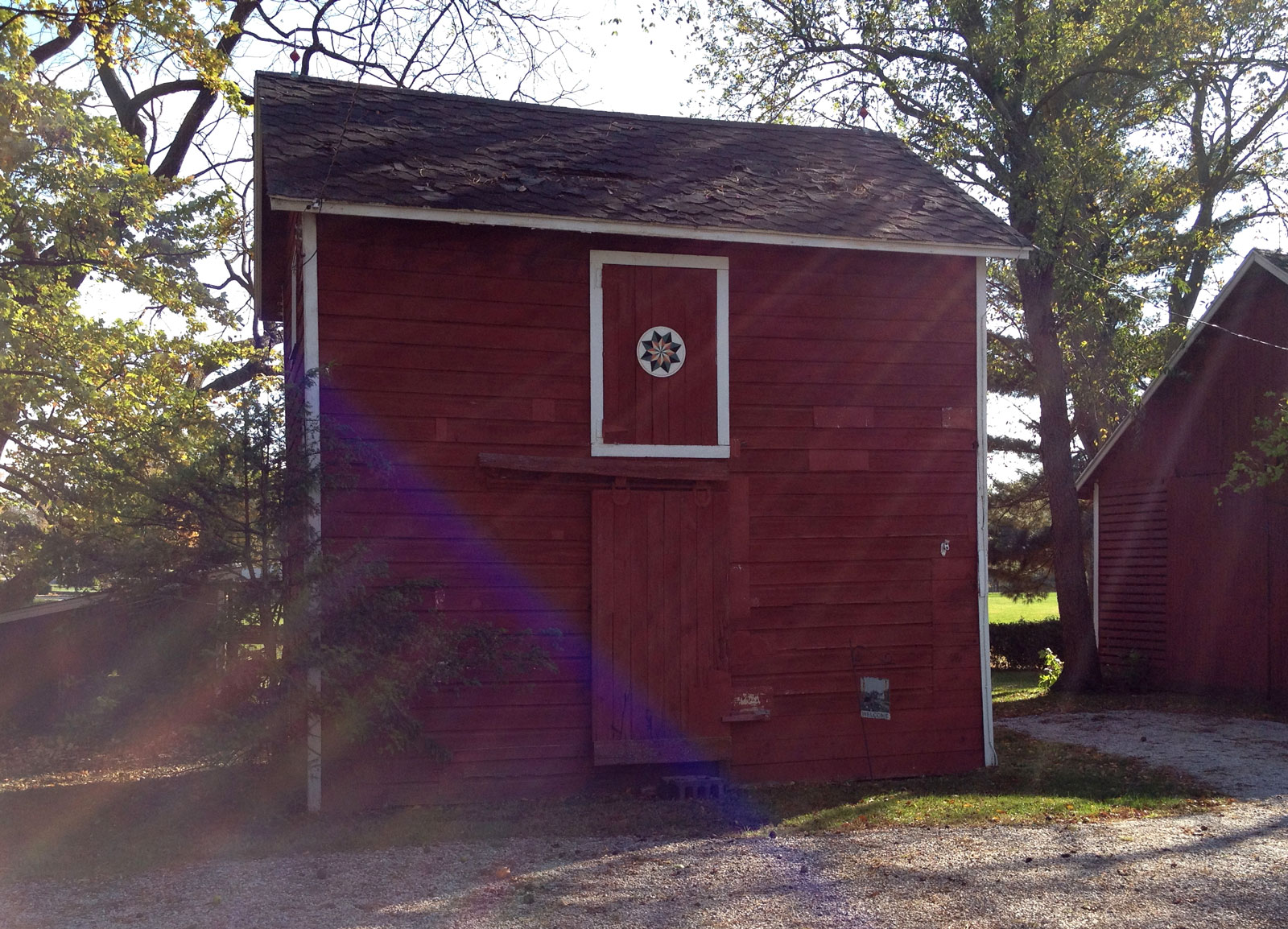 I knew that I eventually wanted to make it into a functional space again, but I had neither the time nor the money to get started on it. It also had the beginnings of a collapsing roof. That was quickly mitigated at the same time as the corn crib roof was done so that it wouldn’t fall into further disrepair while we waited on time to start the other repairs that it was badly in need of. 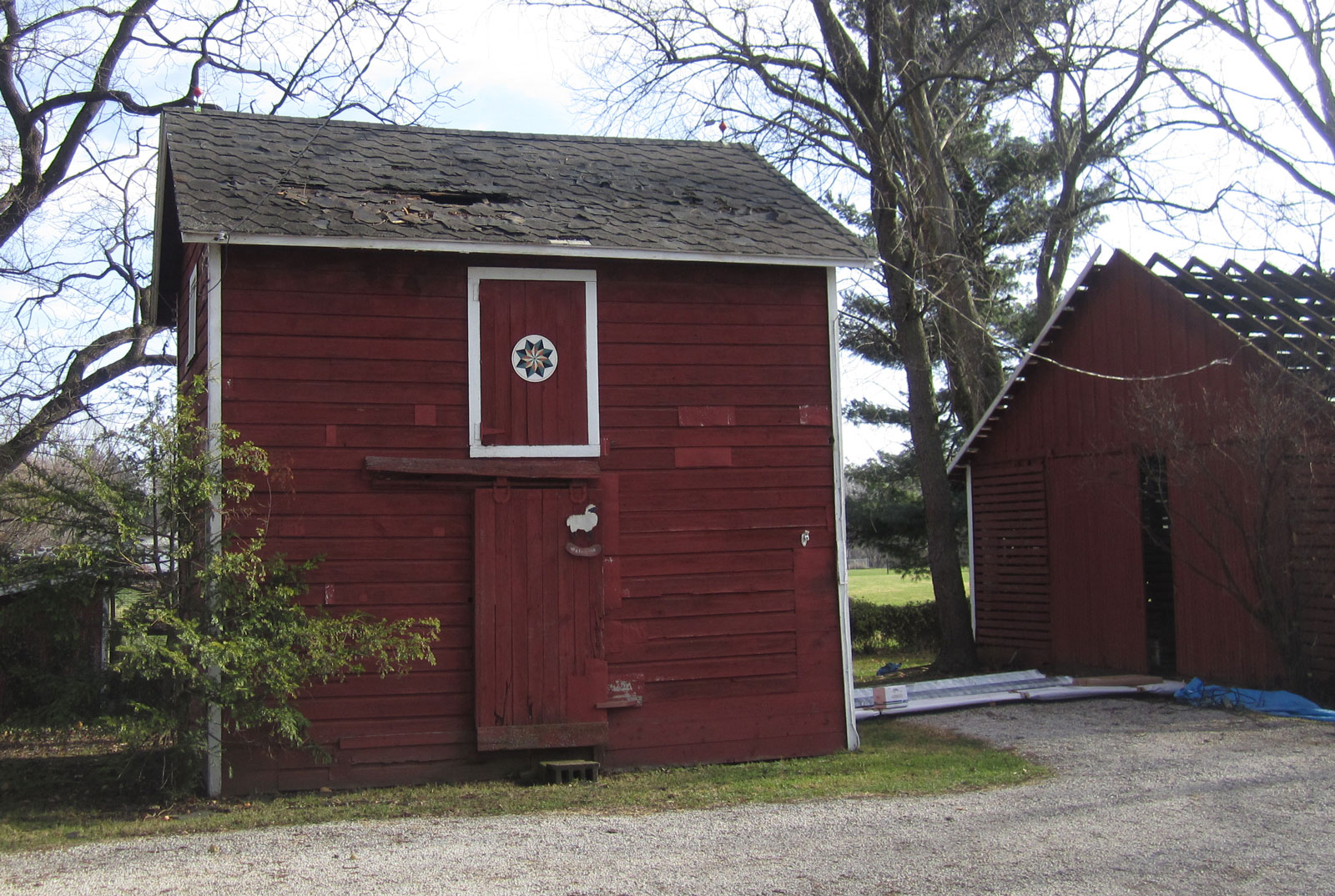 As you can see, in the short time between these two pictures were taken, the old roof had seen quite the bit of damage. The corn crib and granary both received repairs and a new metal roof in the fall of 2011. 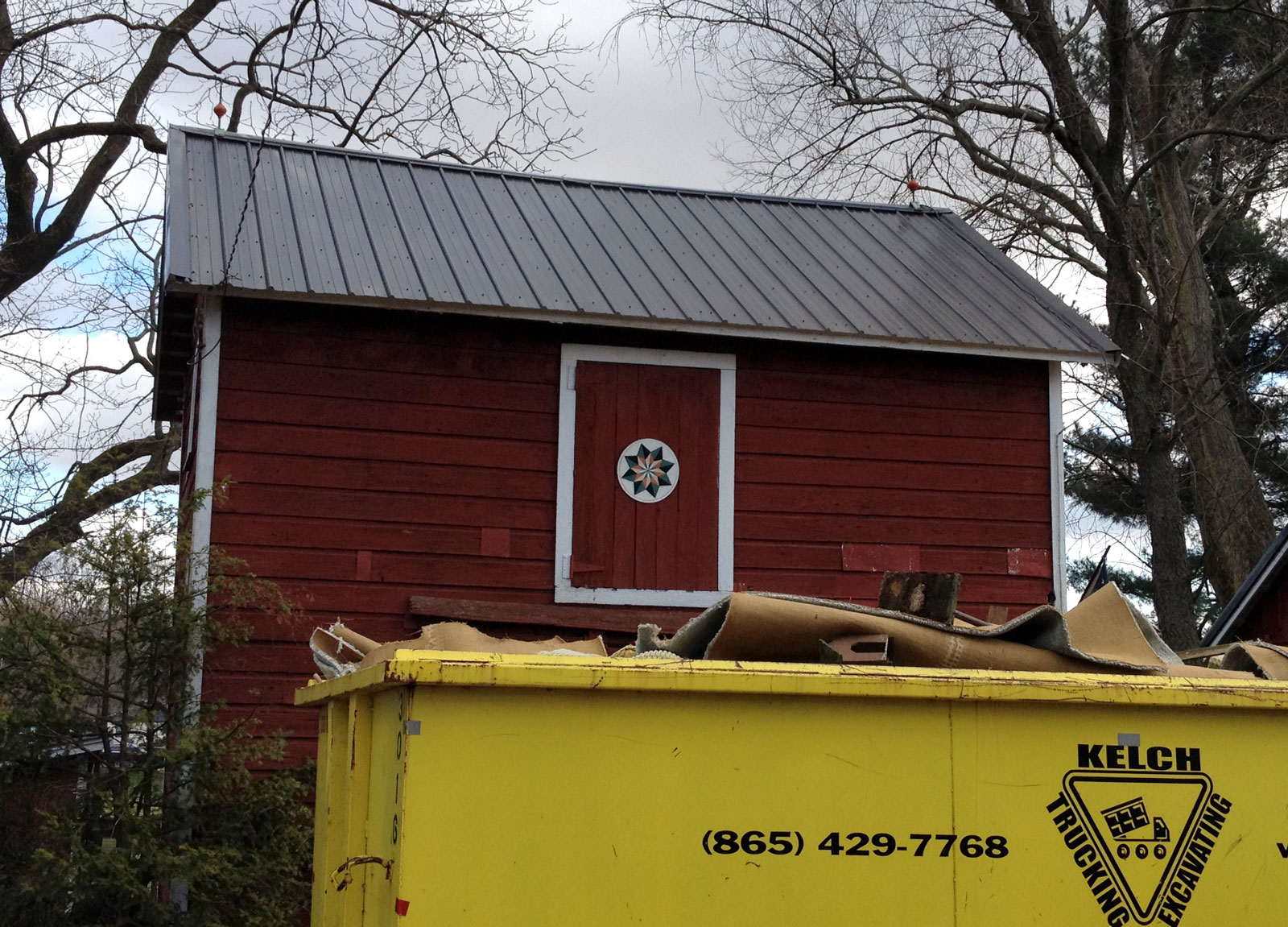 Over the period from 2011 until fairly recently, we did a few minor updates to keep up. We installed a new sliding barn door and track, since the old one was letting in moisture and the door itself was in pretty major disrepair. This kept things pretty buttoned up until recently, when we started to make time to fix the other major problems.

The first issue is that the whole barn was sitting on a fairly questionable foundation. The ground sloped down towards the east side of the building, and the two east ends of the barn were sitting on bricks. While this seemed to have served the function for many years (it’s estimated that this barn was build in about 1850-ish), it needed to be dealt with and put up on a more modern foundation if we wanted to get more years out of it. Nevermind that the bricks looked like they were about to give way if the wind blew too hard… 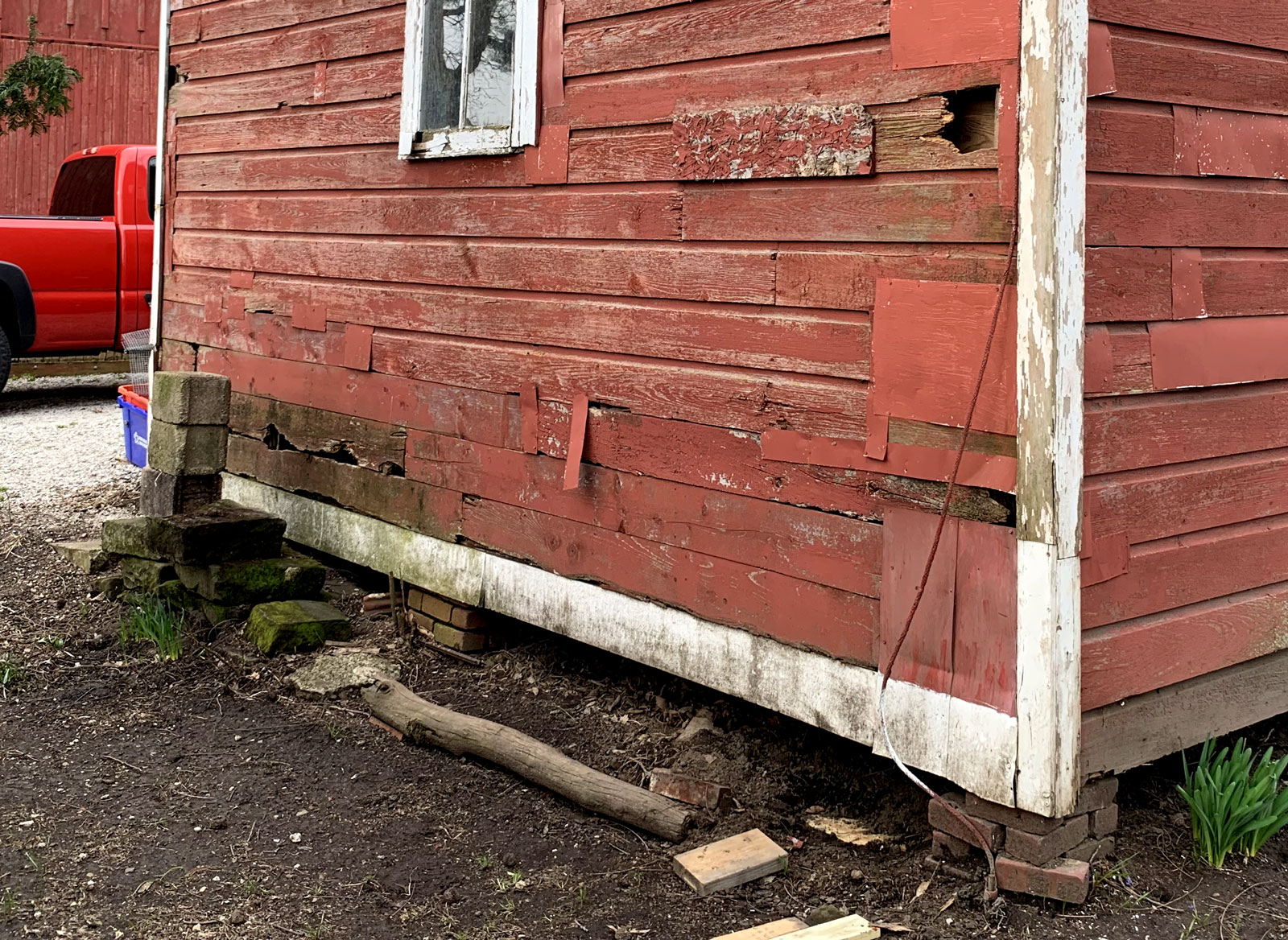 As you can also see in the picture above, after many years of piecework repairs, the siding wasn’t faring too well either. This was a sign of things to come as we started tearing it apart during the new foundation prep.

To infinity and beyond 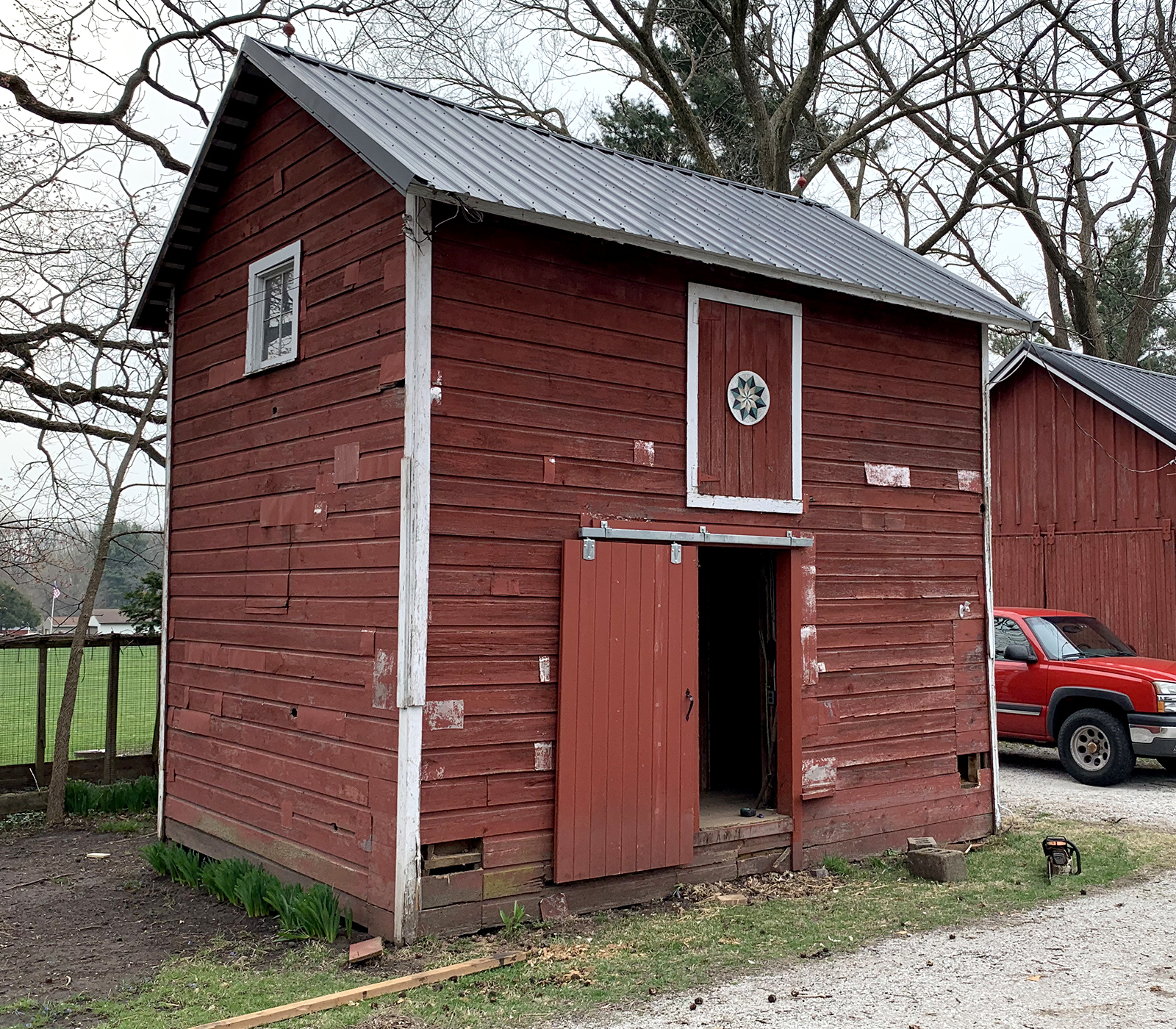 About the time the work was drawing to a close on the exterior of the big barn by Trillium Dell, we started hatching a plan on what we were going to do with the granary. We didn’t really have a good idea of how bad it was going to be until we got the whole barn raised off of the current foundation to assess everything. I had already seen this process done before on the corn crib shortly after we first moved in, but I didn’t know how to approach it if we were to do it ourselves. Forunately, we got the guys to throw some supports in and get the cribbing setup to lift the whole thing up while they were still here. 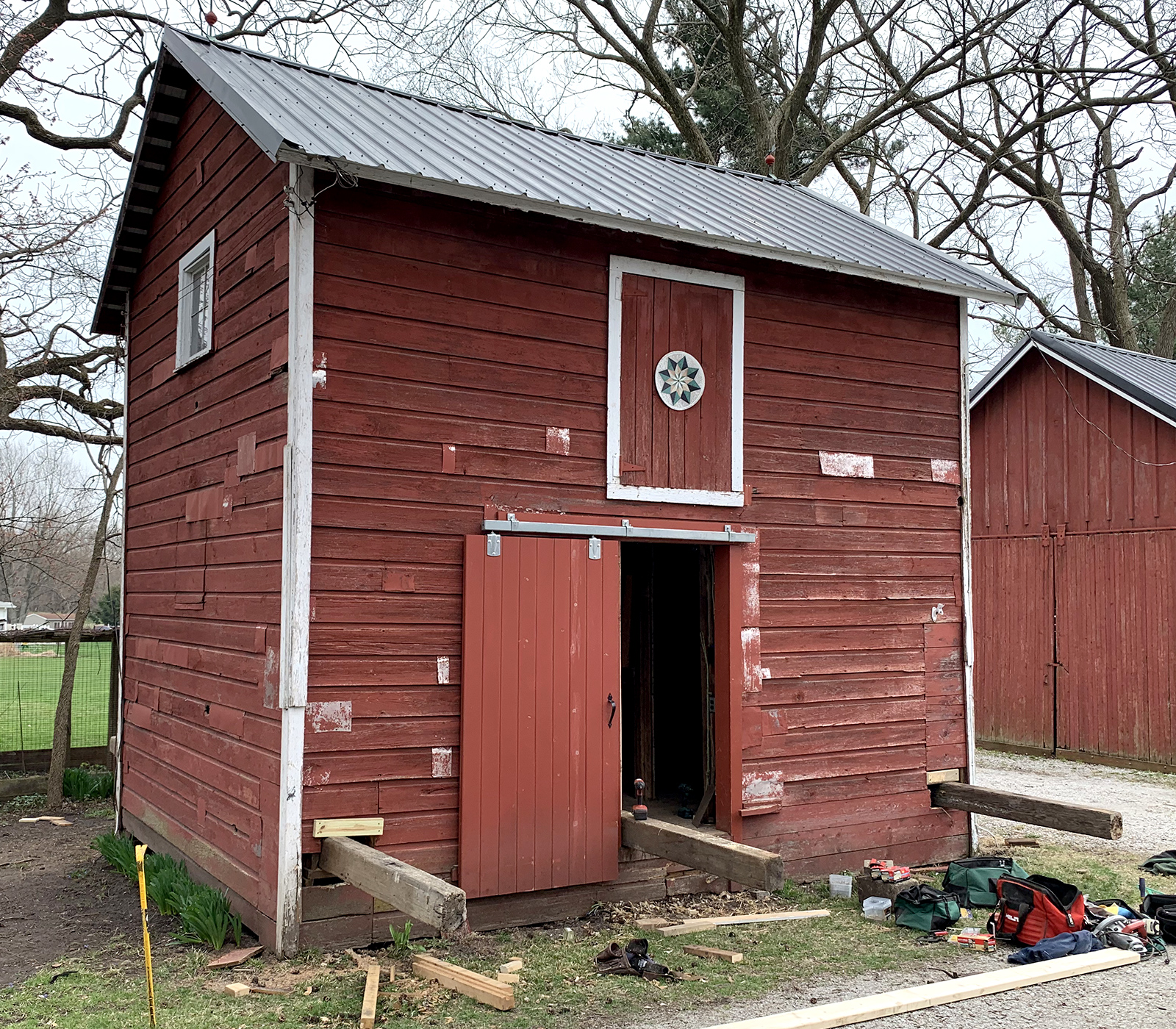 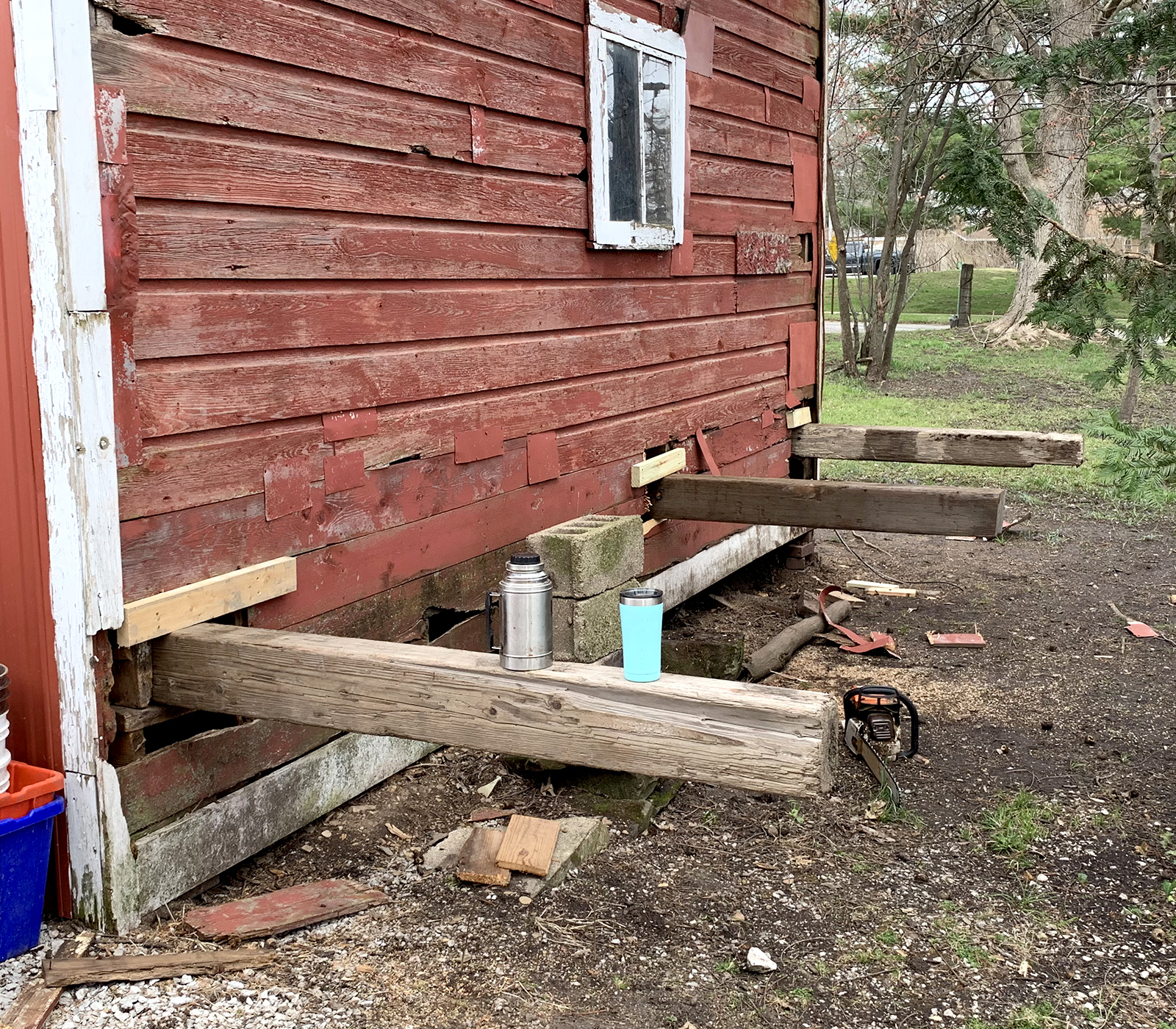 As you can see above, they framed in some large beams all the way through the sides to support the cribbing and support the existing structure. It was overbuilt on purpose with a few layers of extra precautions built in… just in case anything slipped or moved during the time that it was up in the air. Also built with the thought that we may have kids climbing or playing around it and we’d need to work around/under it at some point – we didn’t want it to have the chance to move or come down unexpectedly. 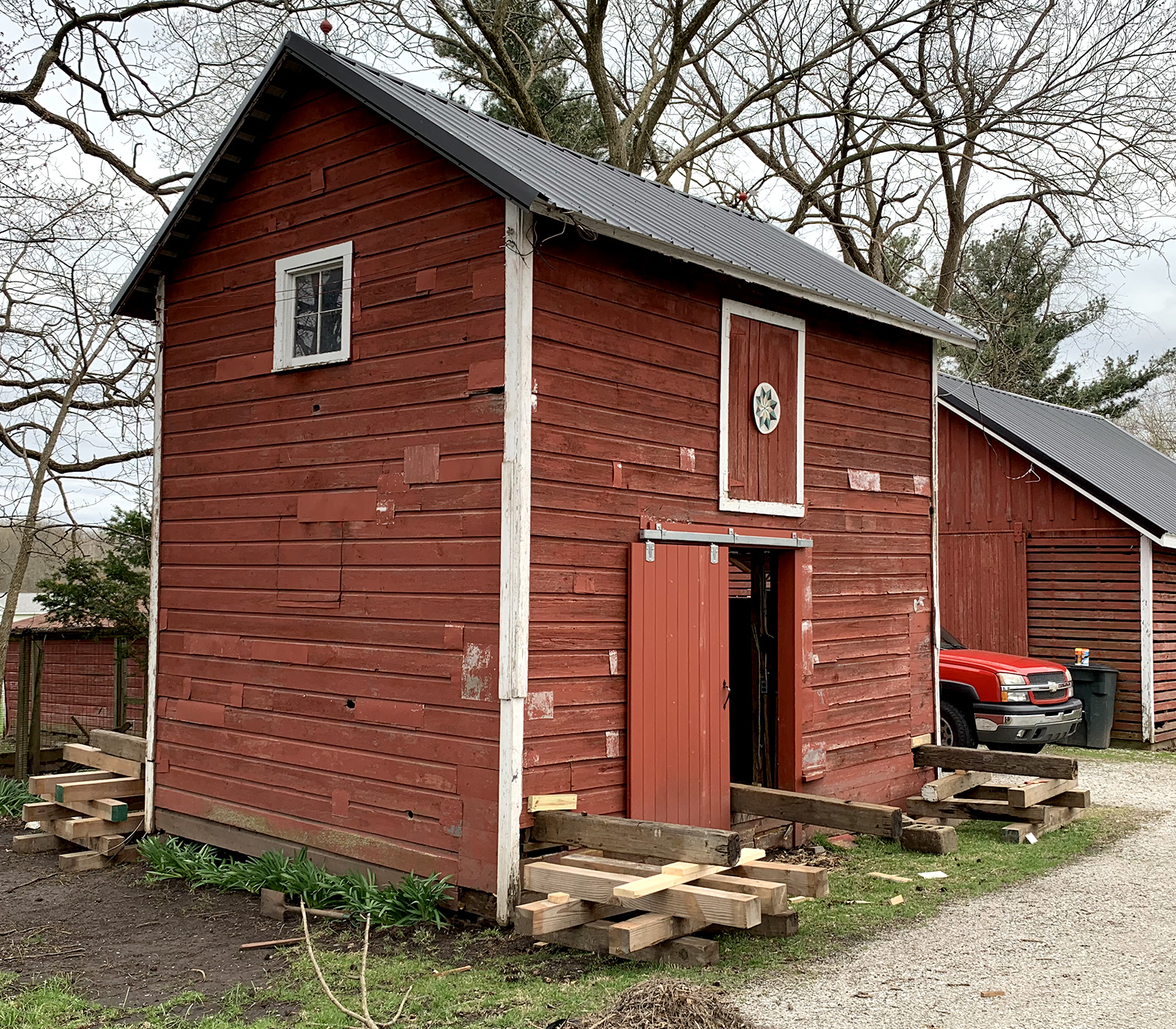 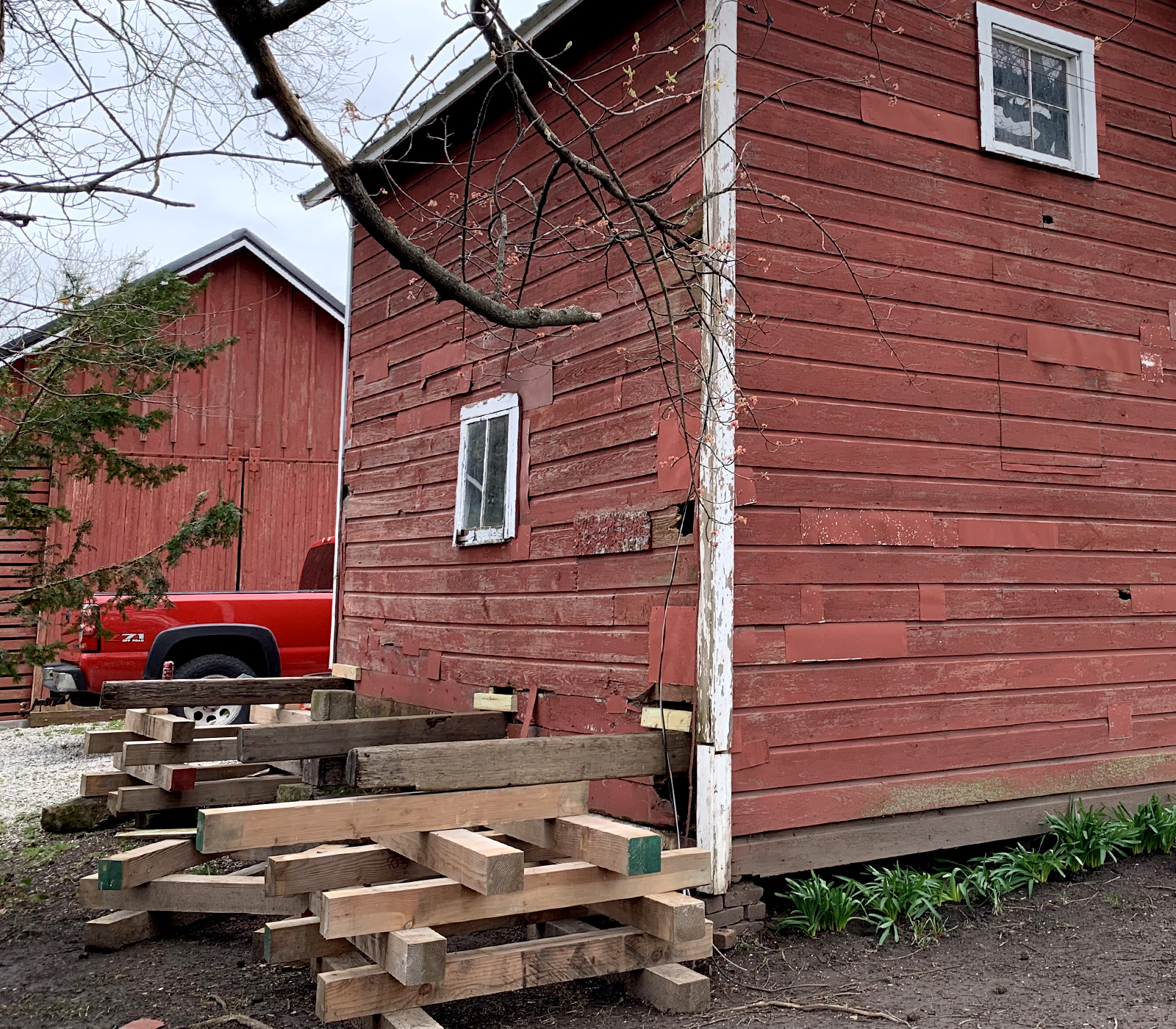 The whole thing was raised up a bit at a time, slowly, using bottle jacks and various sizes of wood supports. Since we were lifing the whole building and not just putting in cribbing as supports, it was able to be jacked up from each corner slowly, and added to as it went further up in the air. Pretty interesting stuff, actually. If I ever need to do this in the future, it doesn’t seem too bad. You’d just need to use common sense and not attempt to make it go faster than it wants to go, if you want to avoid destroying anything. 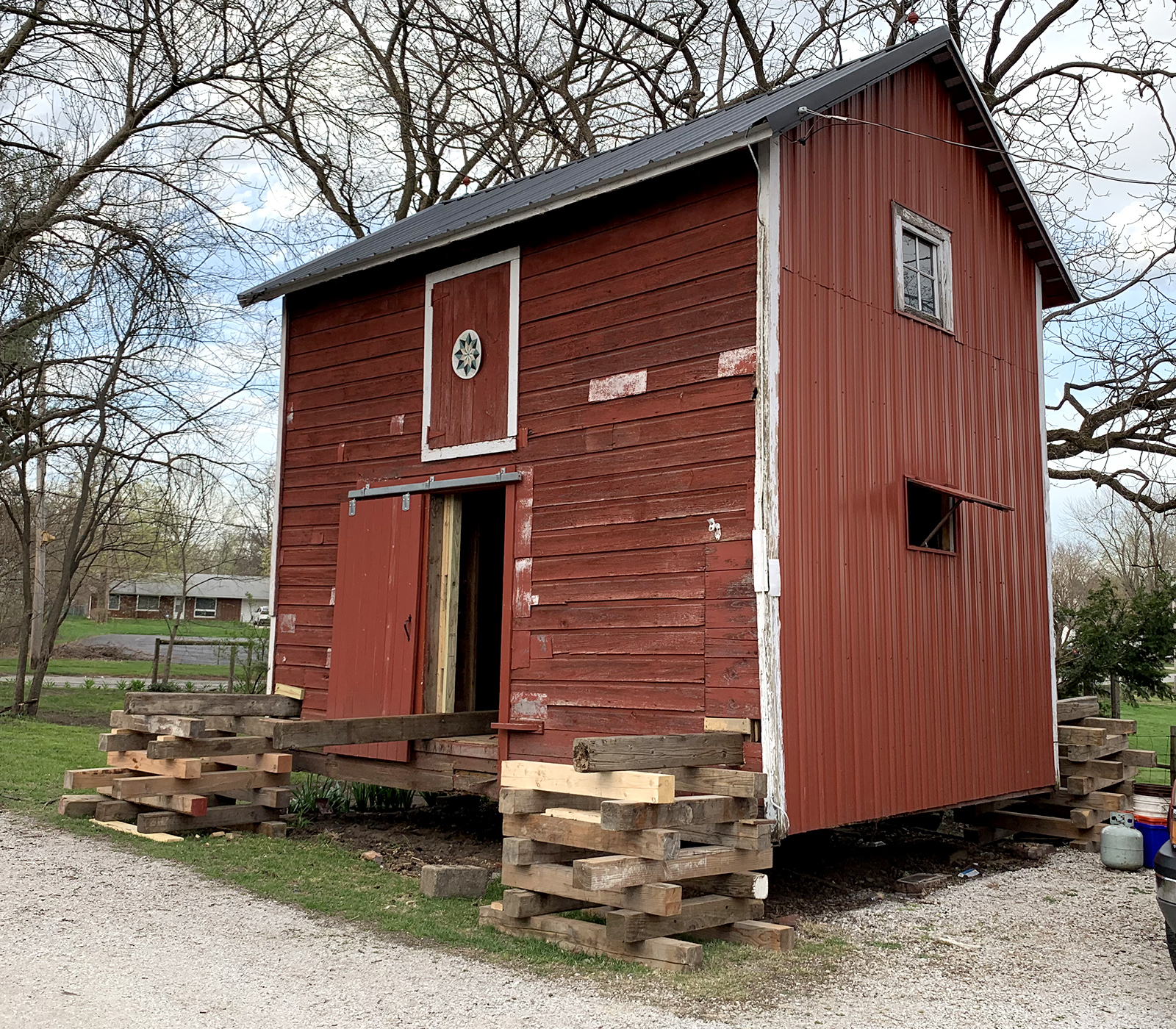 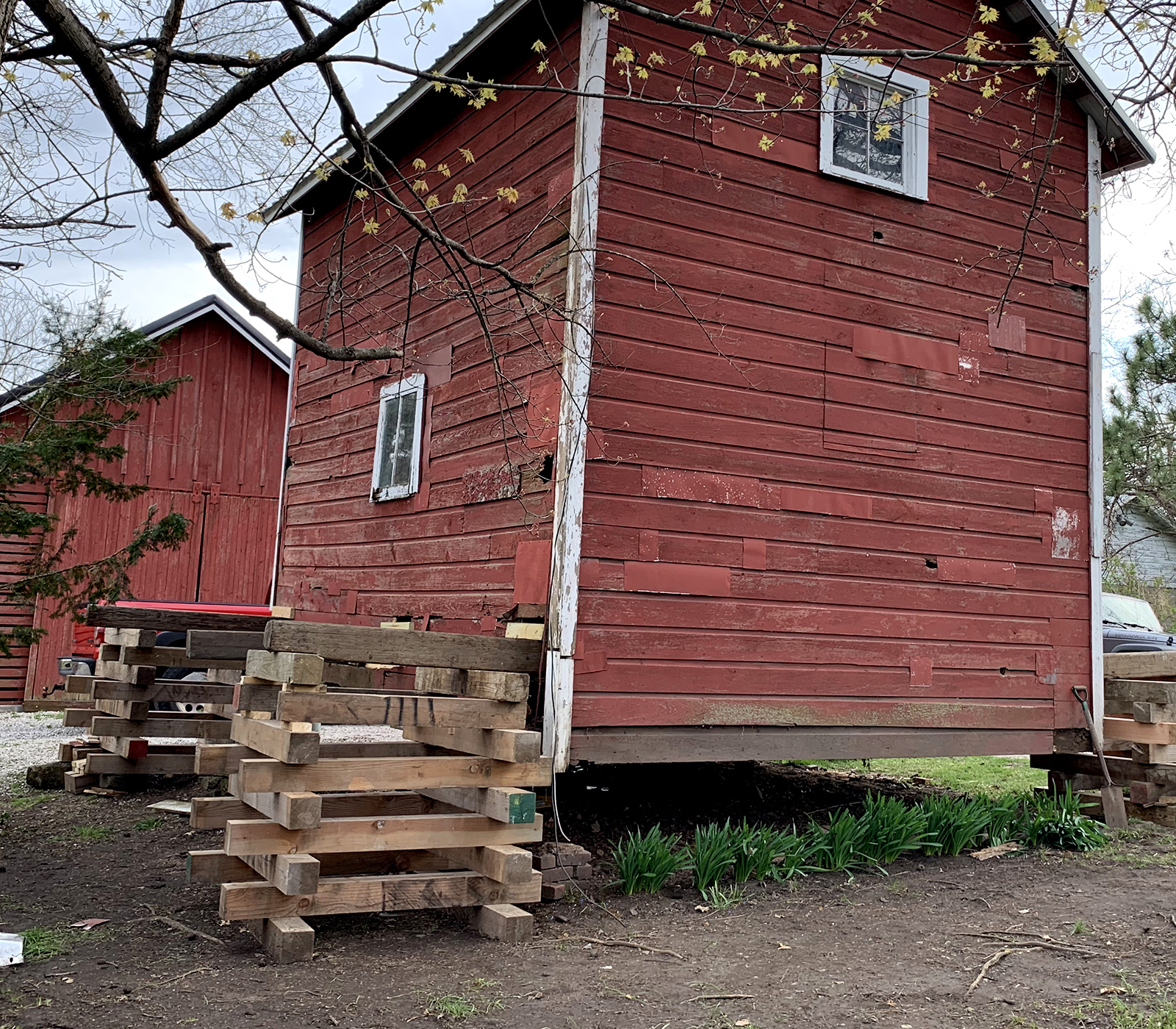 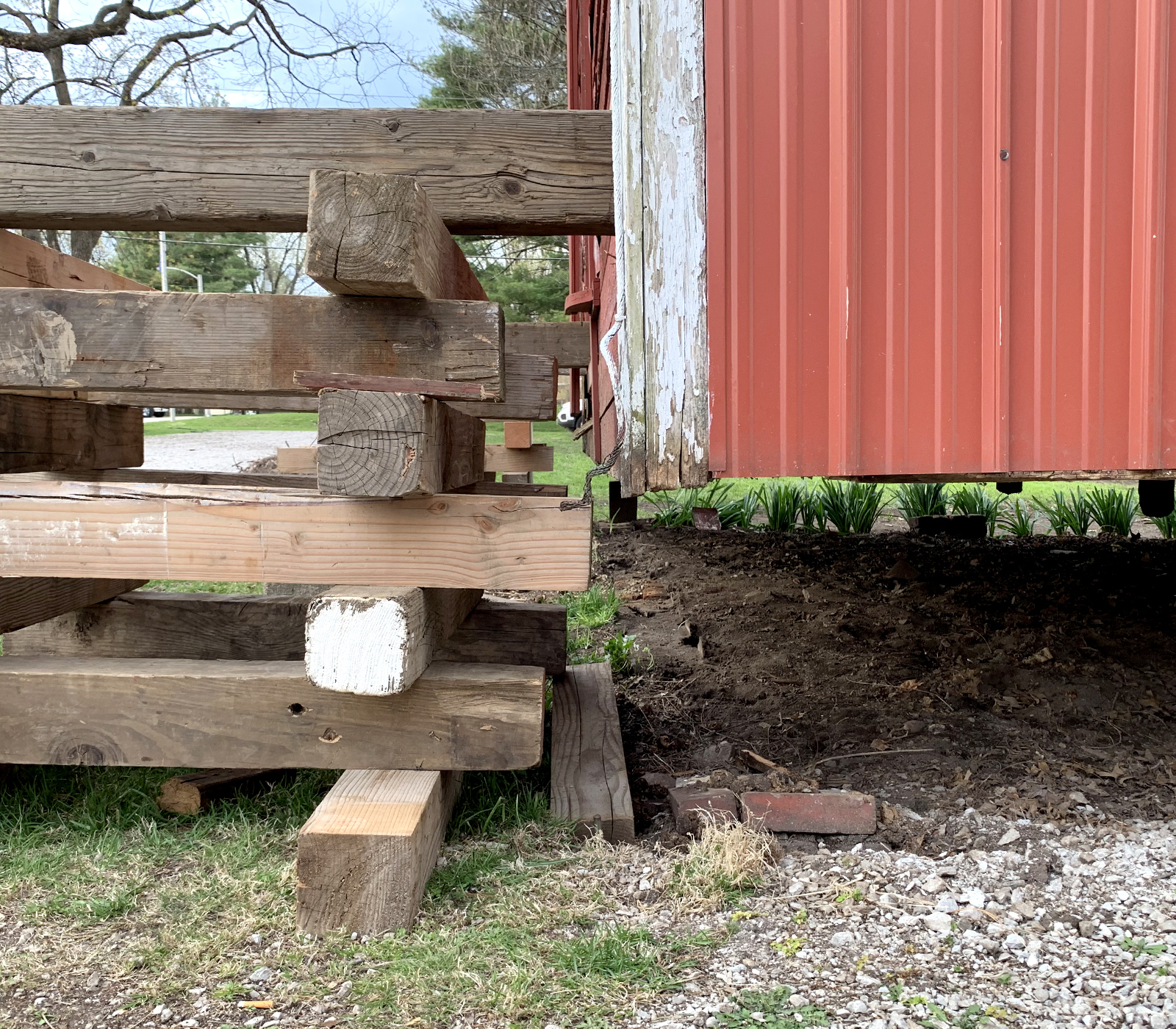 And finally, after not too long, here it is – about two feet off of the ground at the highest point. This would allow us to take our time and redo the underlying foundation (or lack thereof).

Once it was up in the air and we were able to start pulling off some of the lower siding, we got to see what we were really dealing with. It was assumed that we would have to replace some of the footers, but the one of the back was in worse shape than we had imagined. There was a lot of wood AND water damage – it would essentially crumble if you put any kind of pressure on it, at numerious points. 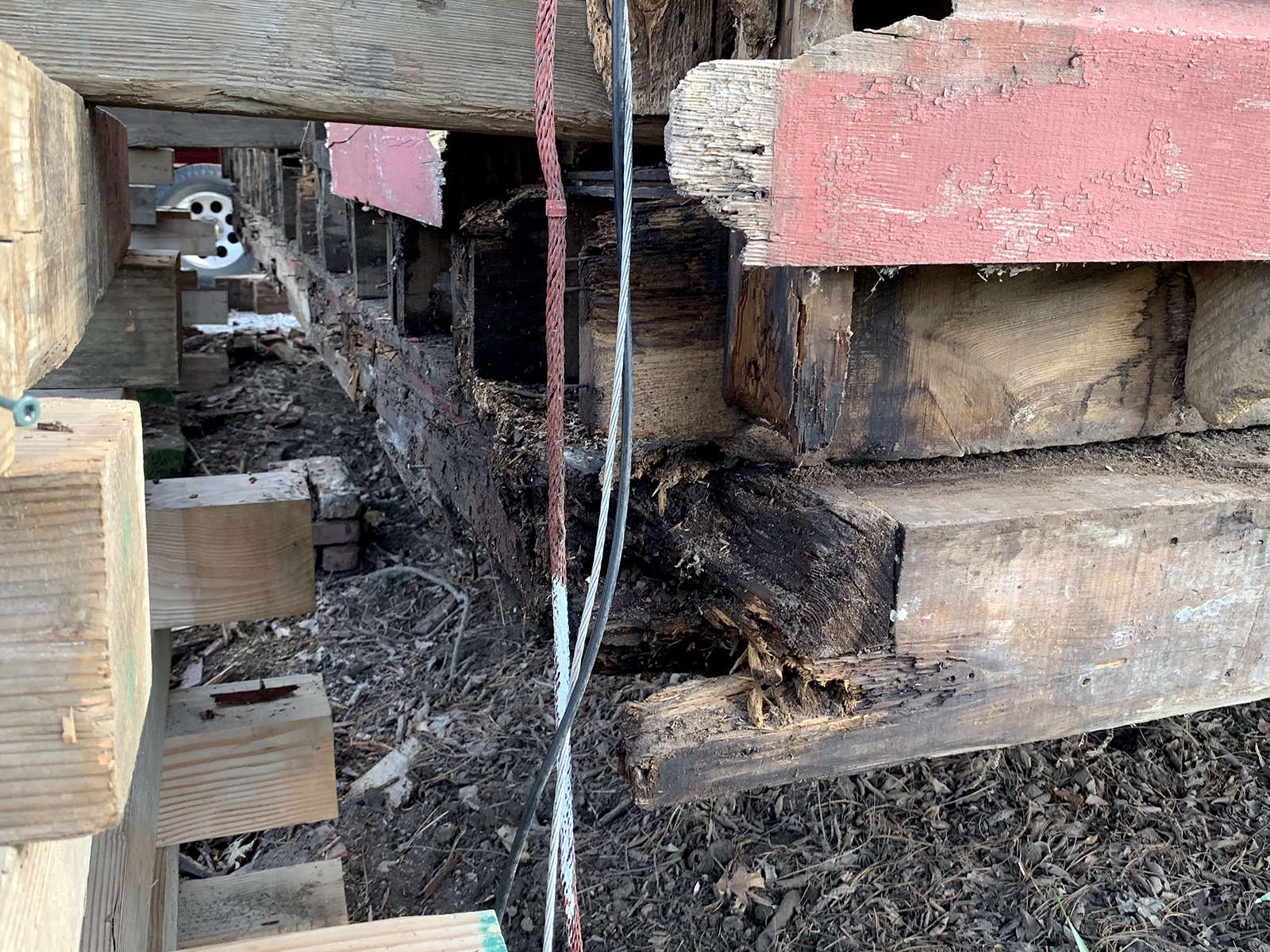 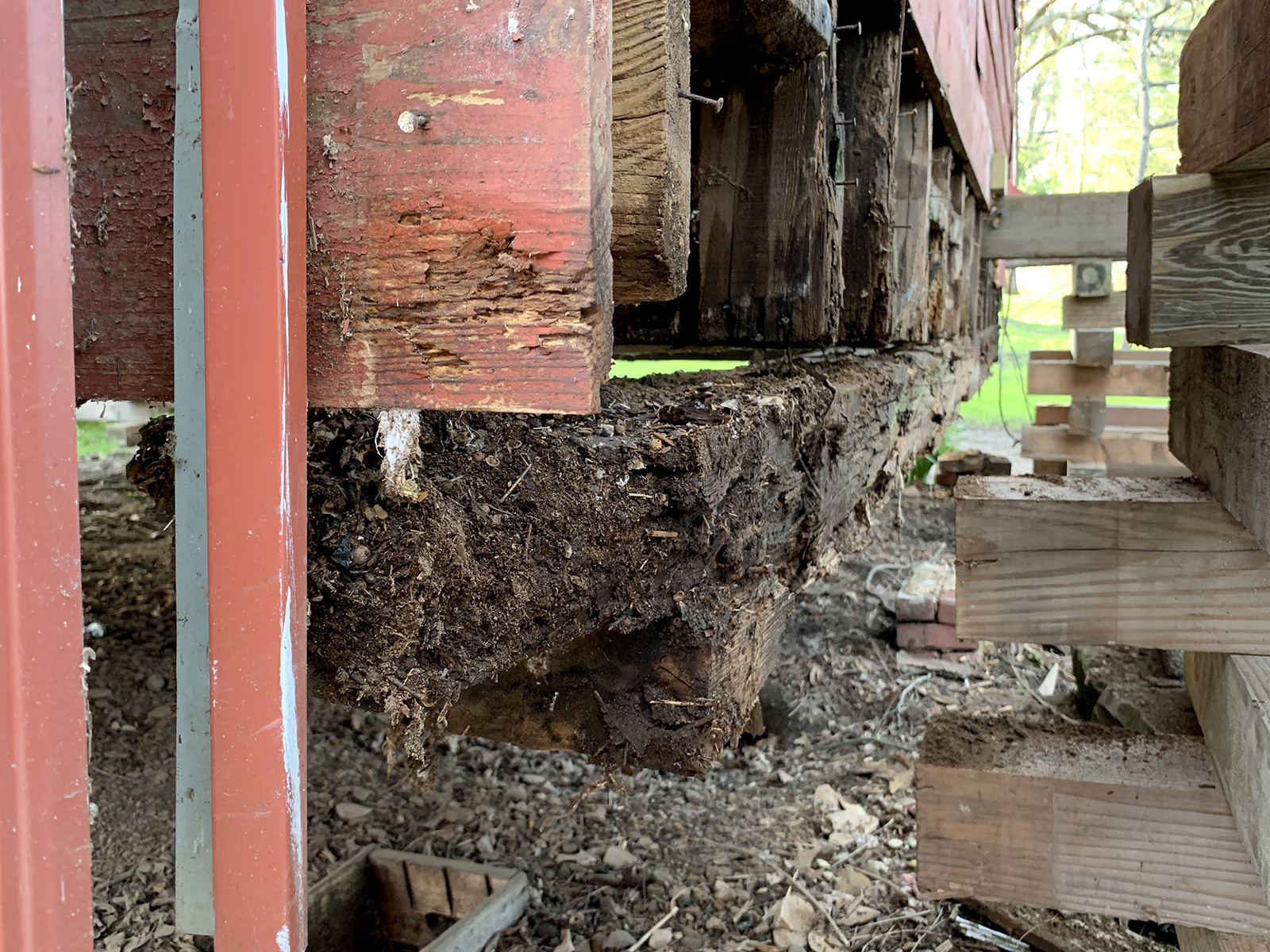 The lap joints at the front didn’t fare much better, as anything that had direct ground contact were pretty much toast. On top of that, the critters that had been making this their home for some time had slowly dug away at the bottom of the studs, leaving lots of places that moisture had penetrated and done quite the job on everything. 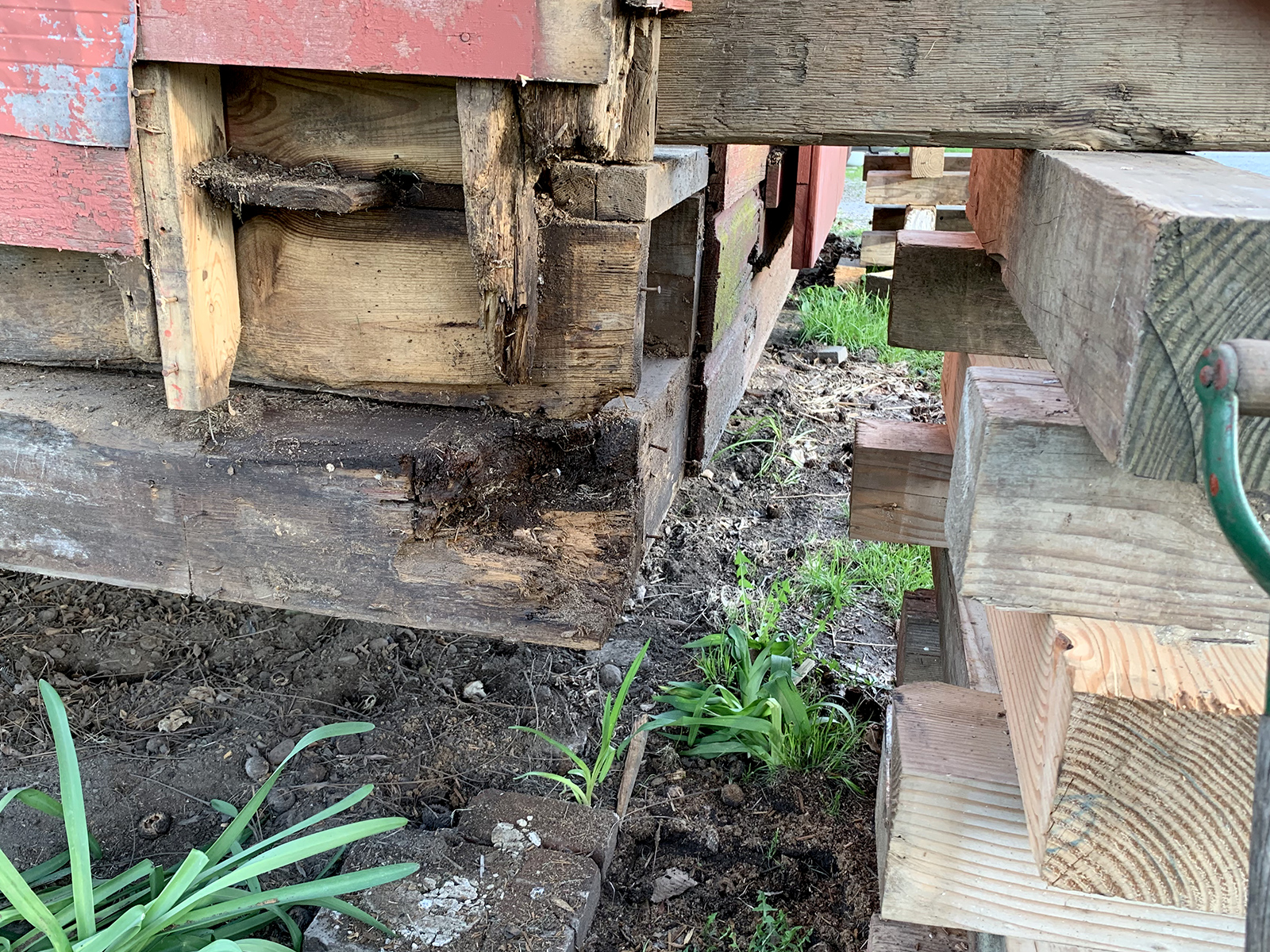 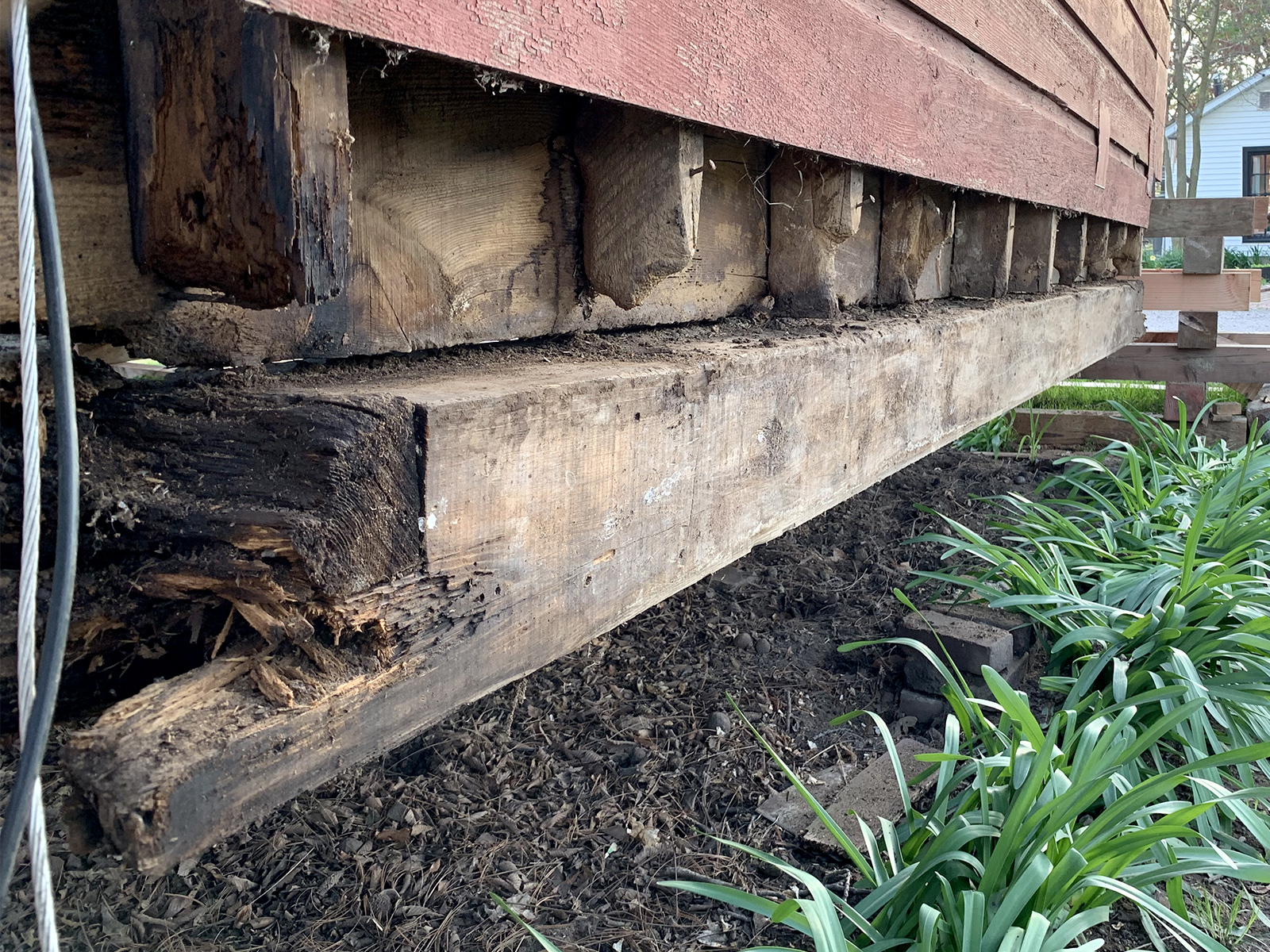 At this point, we were left with a few options. We eventually decided that it would be best if we went the semi-historical route and replaced the giant 8x8 beams with suitable replacements. This meant sourcing three 18’ long beams and two 14’ long beams locally. Not an easy thing to find, as no lumberyards just have anything like this in stock, not even of the rough-sawn variety. That meant that we’d need to find someone that was able to mill beams this long from some long-lasting tree species. Fortunately, we ran across a gentleman that was local that was able to get us what we needed – five 8”x8” oak beams, in our desired length. Once they were ordered, cut and ready for pickup, Mike got them loaded up on the big truck and bounced them back to the house down the highway. (Did I mention that they’re upwards of 500 lbs each?)

These things are no joke. Also of note: they were not easy to move around. Once they were dropped off (luckily, there’s a dump bed on the big truck Mike used to go get them, so he just slid them off…) I managed to lift them up, one end at a time and get them elevated, as to not completely kill the grass underneath, and aid in letting them get some air all around to help them dry a tiny bit faster. 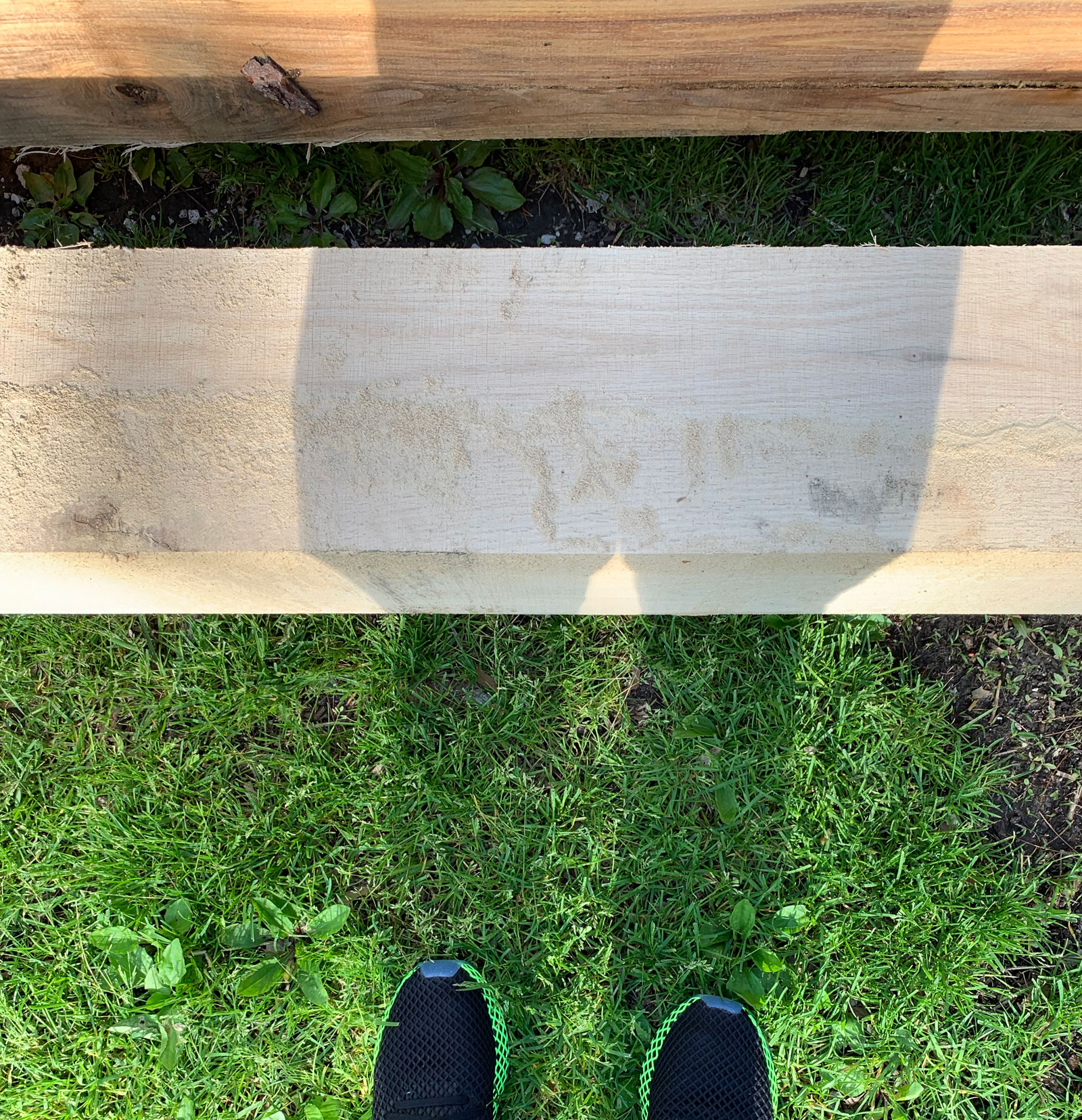 As I had time throughout May, I measured and then cut/chiseled the half-lap joints to match the existing beams. Not a quick job at all, but I definitely learned a lot about timbers and old-world techniques. We then removed the old beams that were still attached, which was relatively easy. Three of the four essentially fell off when I was in the process of removing some of the siding, which leads me to believe that they were only still attached by a few nails per. The middle support beam required a bit of gentle persuasion with a four foot pry bar, but they all came off without much of a fuss.

Mike moved the new beams next to the building one by one with a tractor and we got them staged to be slid into place, while we waited for the concrete guys to come over and pour the new footers.

In the middle of May, the concrete guys came out and poured the new footers for our beams. Ideally we would have gone with a complete slab, but we got an outside perimeter pour with three piers in the middle (to match what was originally there). This was fine, but we would have to change up the way that we were going to do the middle beam supports and eventually go in and remove some flooring to put in some additional fill materials under the structure. 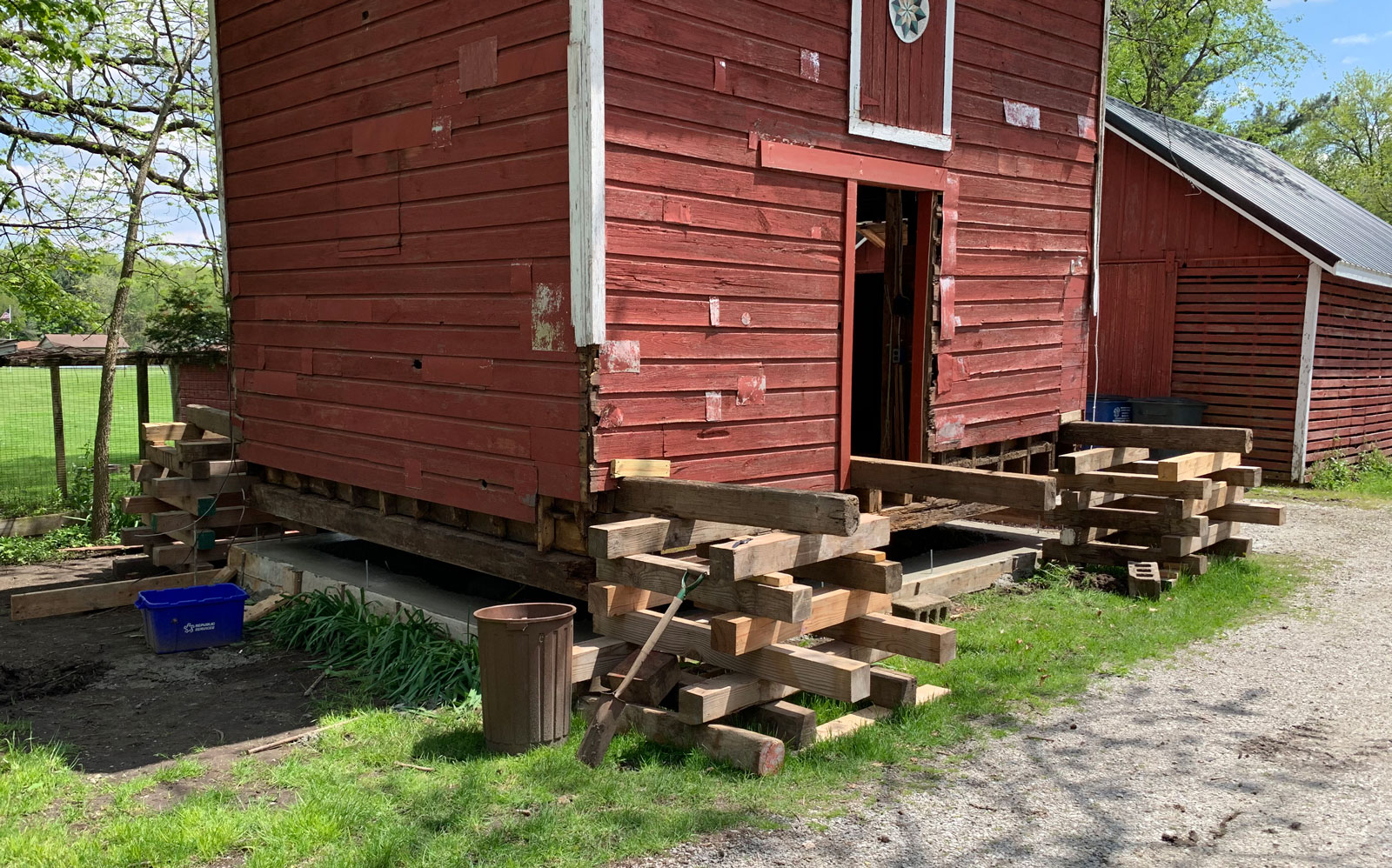 We were then able to get the 8”x8” beams positioned into place through a series of lifting, inching, cursing, sweating and leveraging. Each beam then had to be measured at each lap joint, drilled out for pegs, offsetting the holes on the lower beams to pull them tightly in the direction that we needed them to move. I can write up a whole post on how we did this, but just know that it was an immense pain in the ass, but it got done. 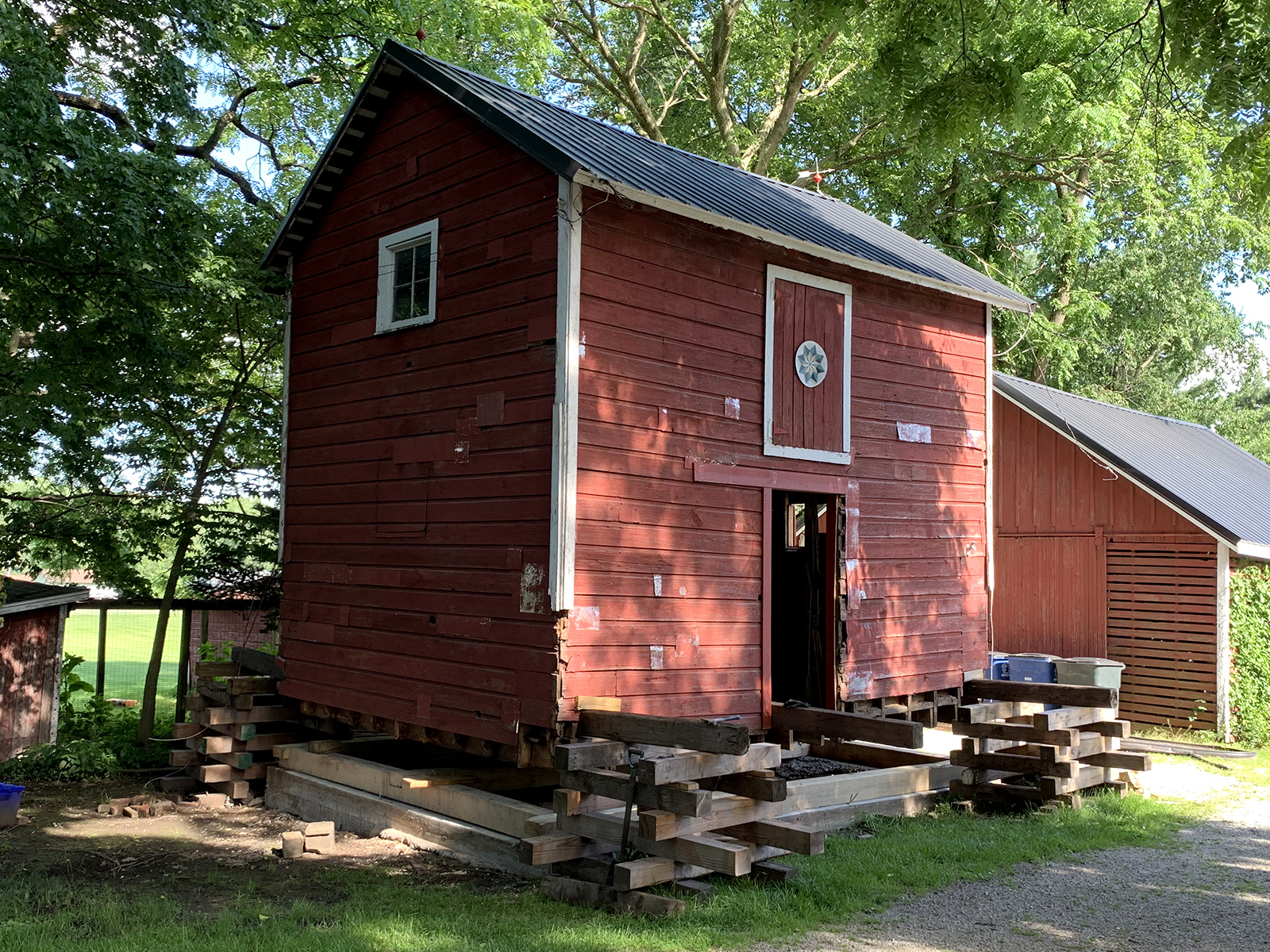 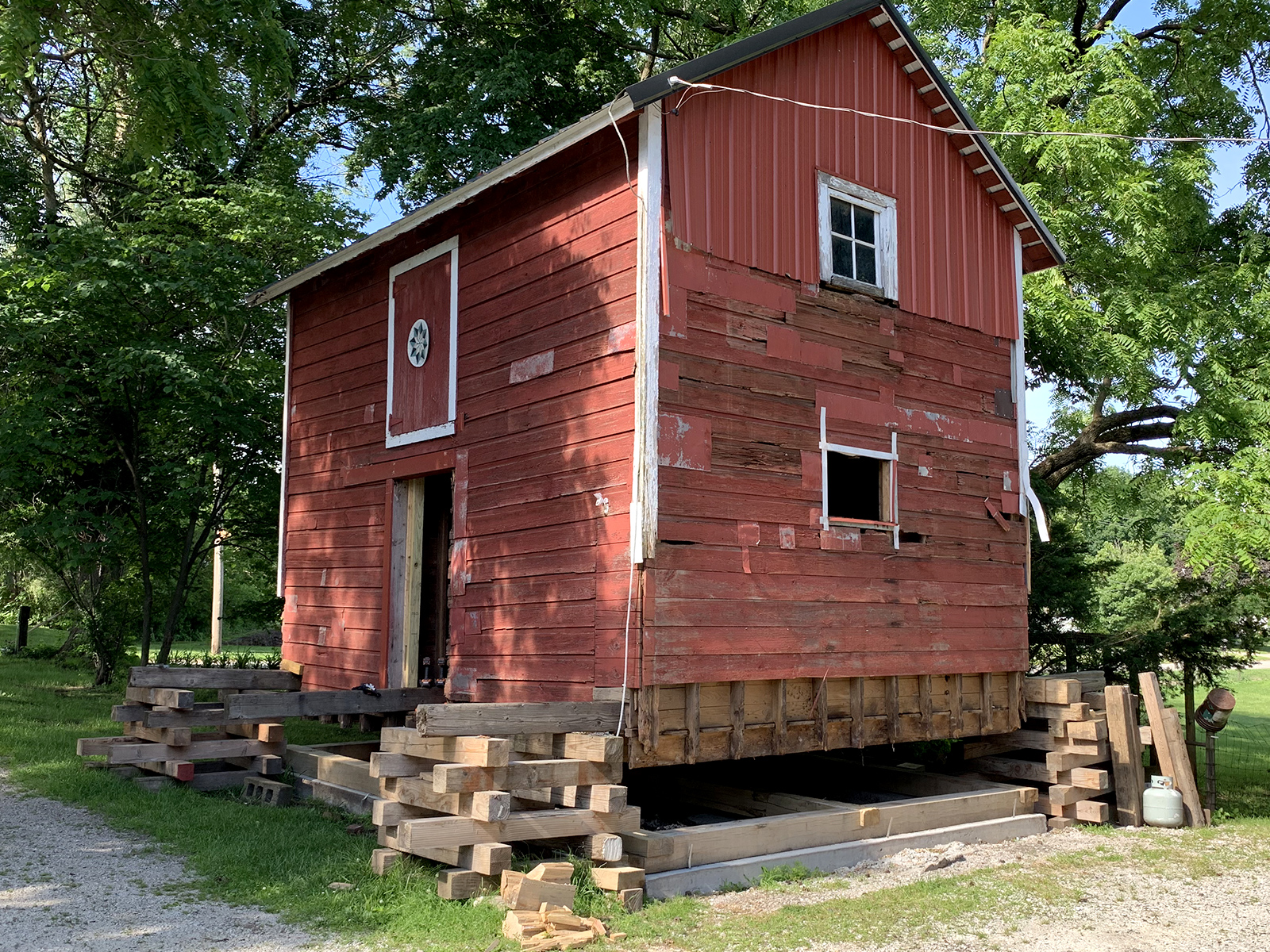 Now, we were finally ready to have a building dropped back on top…

The day was finally here… we were gonna get this thing back down on the foundation!

Chad from Trillium Dell headed back over to help us get everything set into place, but when he got here he mentioned something about a vapor barrier between the beams and the concrete. Shit. In all of our prep, that’s the one thing that we didn’t do. Fortunately for us, it wasn’t too difficult to accomplish before we lowered everything down. Since some of the beams were naturally bowed already, we were able to slide some 10mil plastic underneath part of the way, then using a few long pry bars, lift the beams up enough to slip them the rest of the way under all of the beams. Problem solved!

After about four or so hours of jacking up/down, moving cribbing around, and taking things out – we finally got everything lowered back down onto our new beams without much hassle. And the final product (which is almost square, haha): 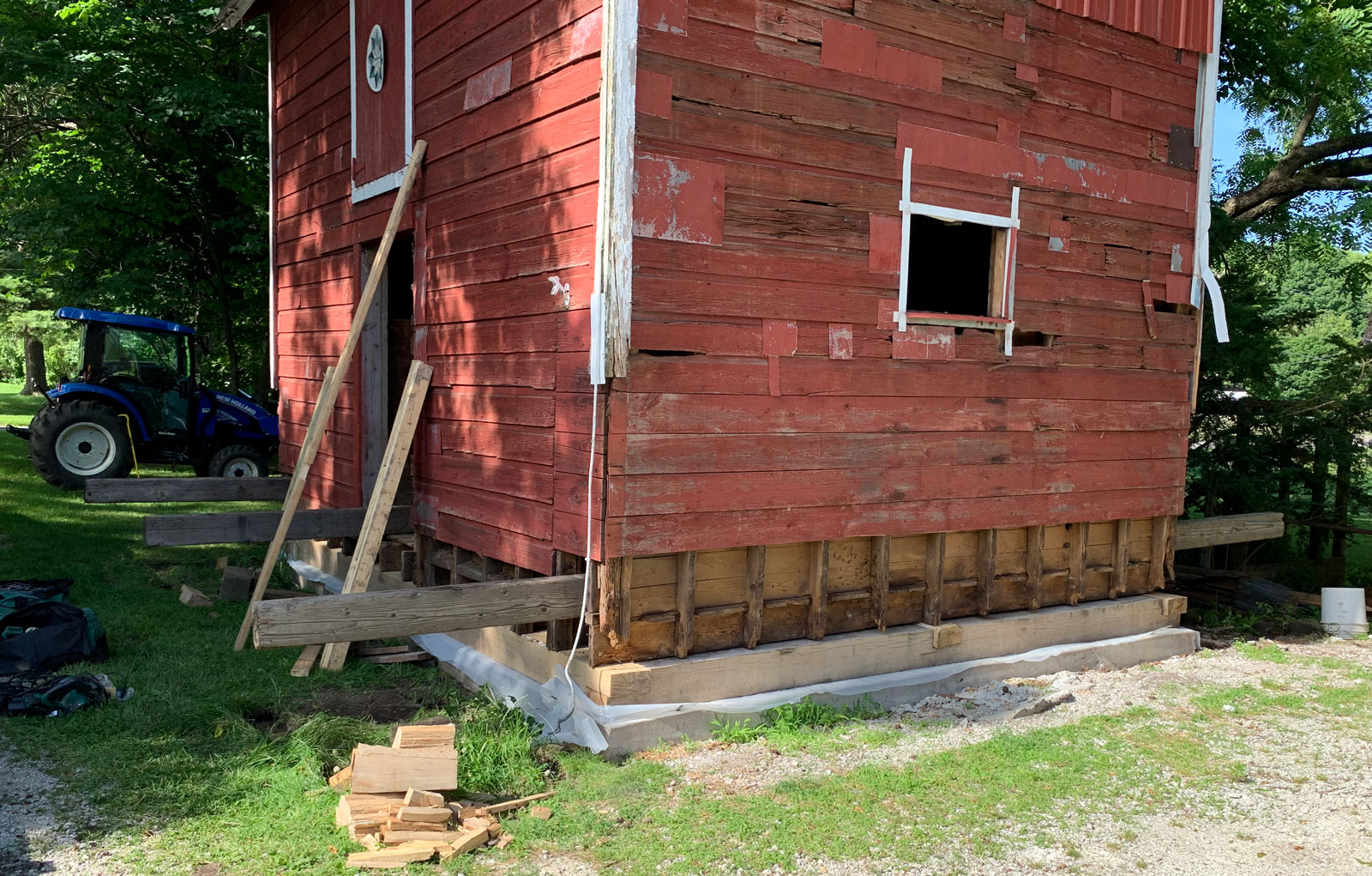 Once all of the cribbing and support beams were taken out (man, there was a TON of support inside), it’s starting to look like an actual barn again. Cleaned up, it’s looking pretty respectable – other than the obvious amount of additional work that still needs to be done: 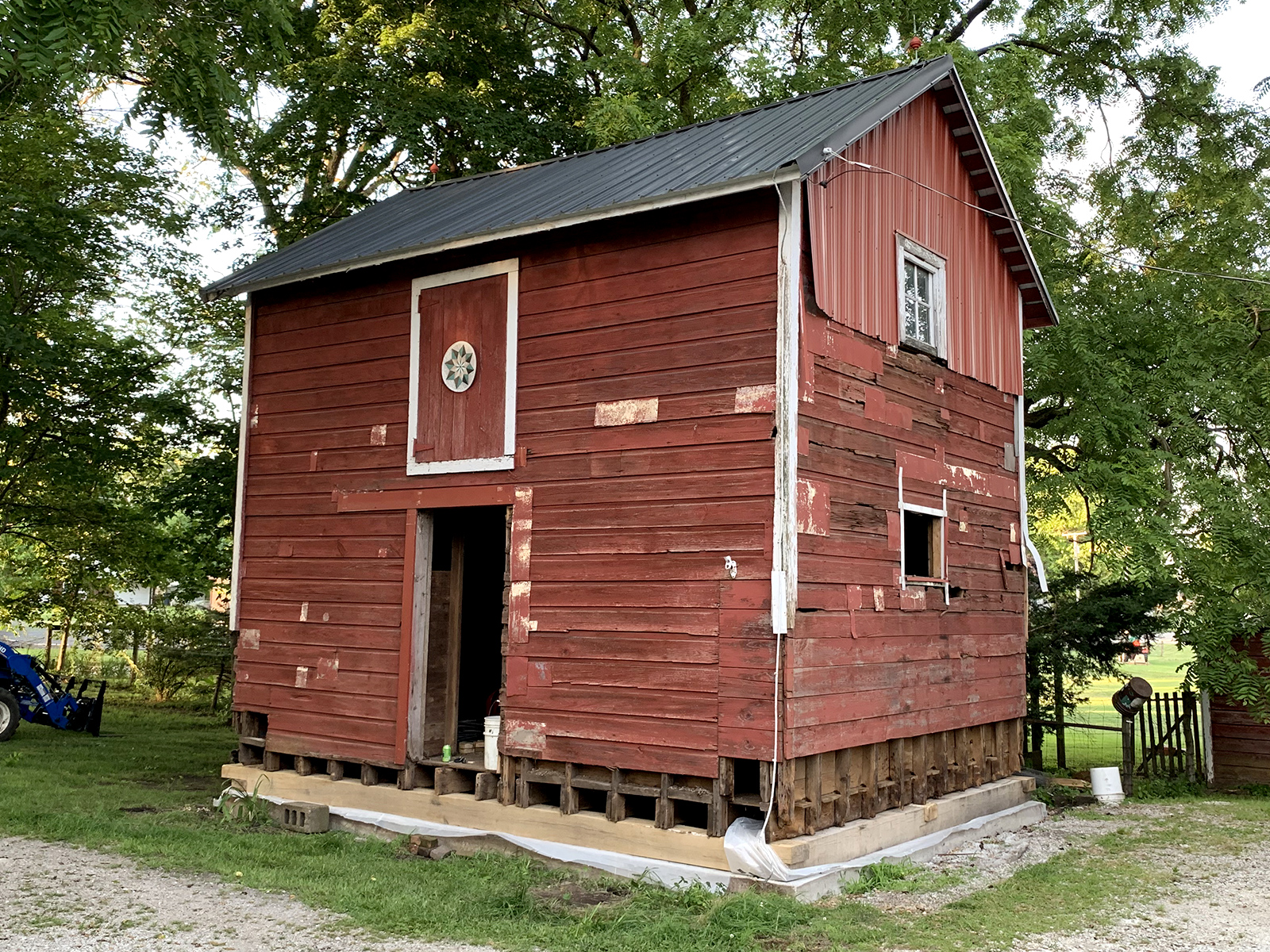 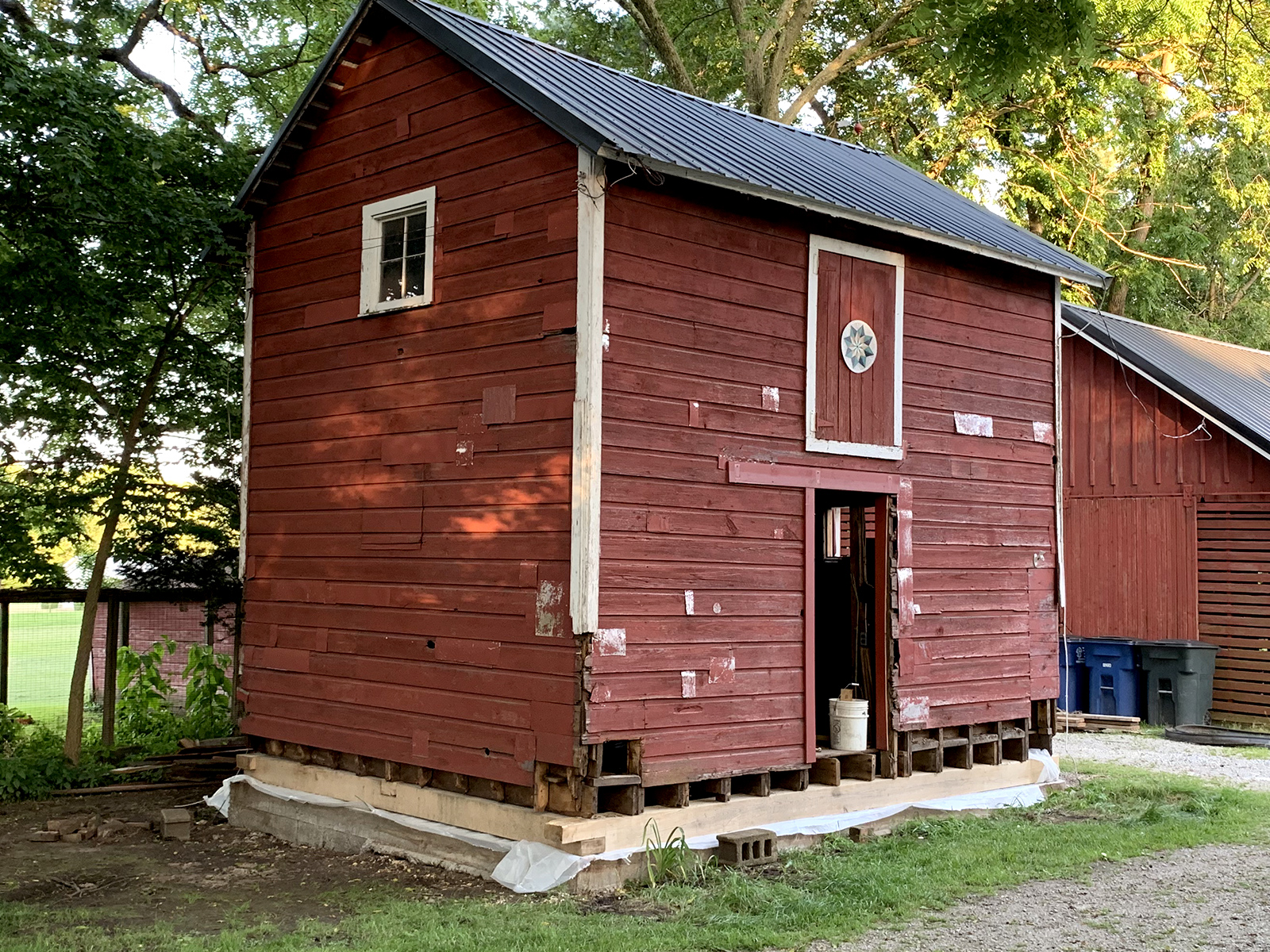 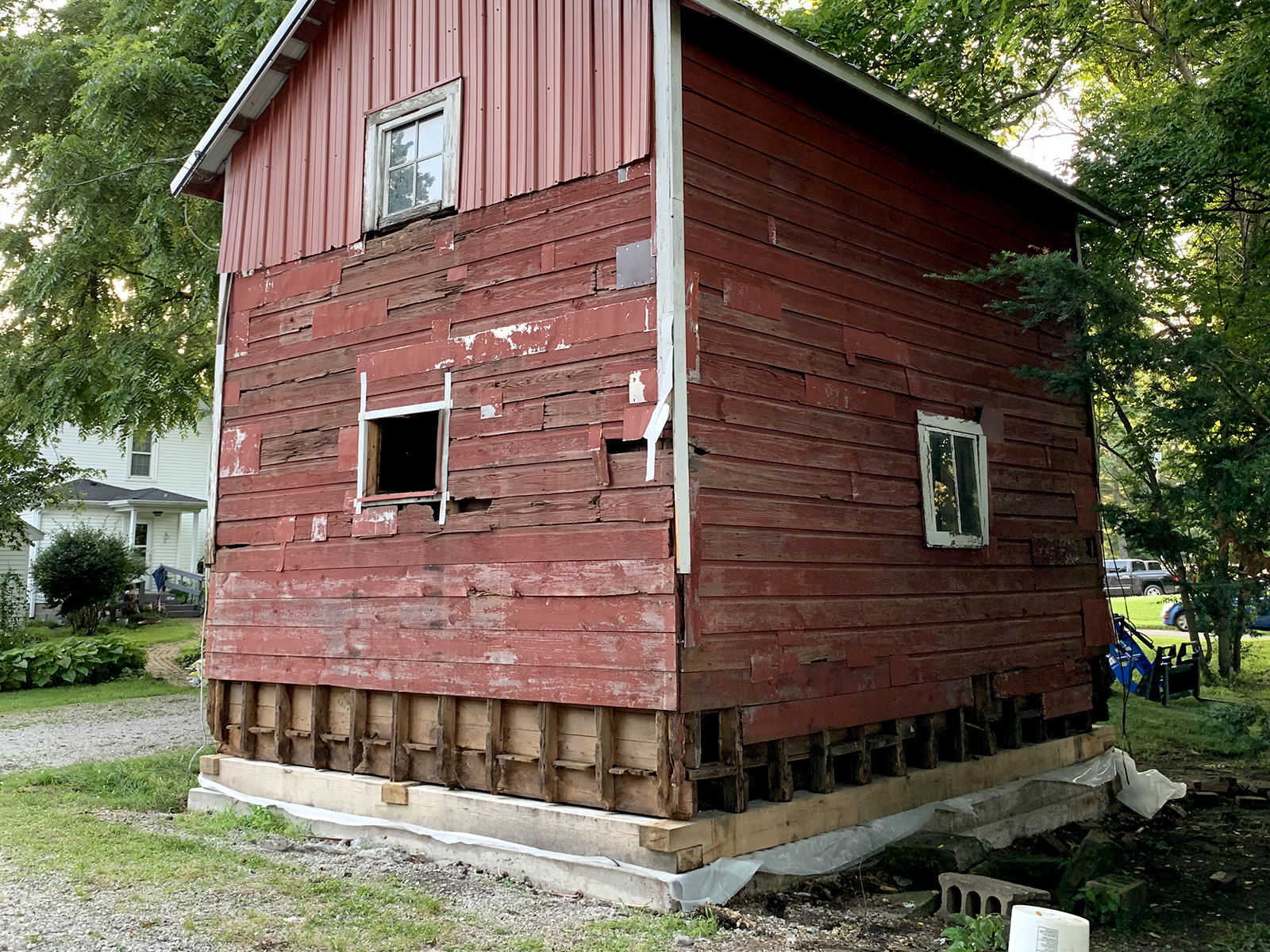 About the time July rolled around, it was starting to get hot and miserable outside. Time to work inside of a barn, right?

This brings us about to the present. We got in and cleaned up a bit of the inside, removing additional trash and building materials that were around. Then once that was cleaned up, proceeded to knock out the interior walls downstairs. Since these weren’t structural at all, it wasn’t difficult. Once the inside was opened up with no walls, it’s amazing how much larger the whole thing seems.

Before we get to the rest of the structural fixes that need to get buttoned up before we can begin to put up the new board and batten siding (the same stuff that we used on the big barn), we need to finish everything else that’s vital to the rigidity of the building as a whole. This includes fixing the “death stairs”. As you’ll see below, the new stair stringer is set up roughly where it will sit in place. Comparing it to the older stairs, there’s quite the difference: 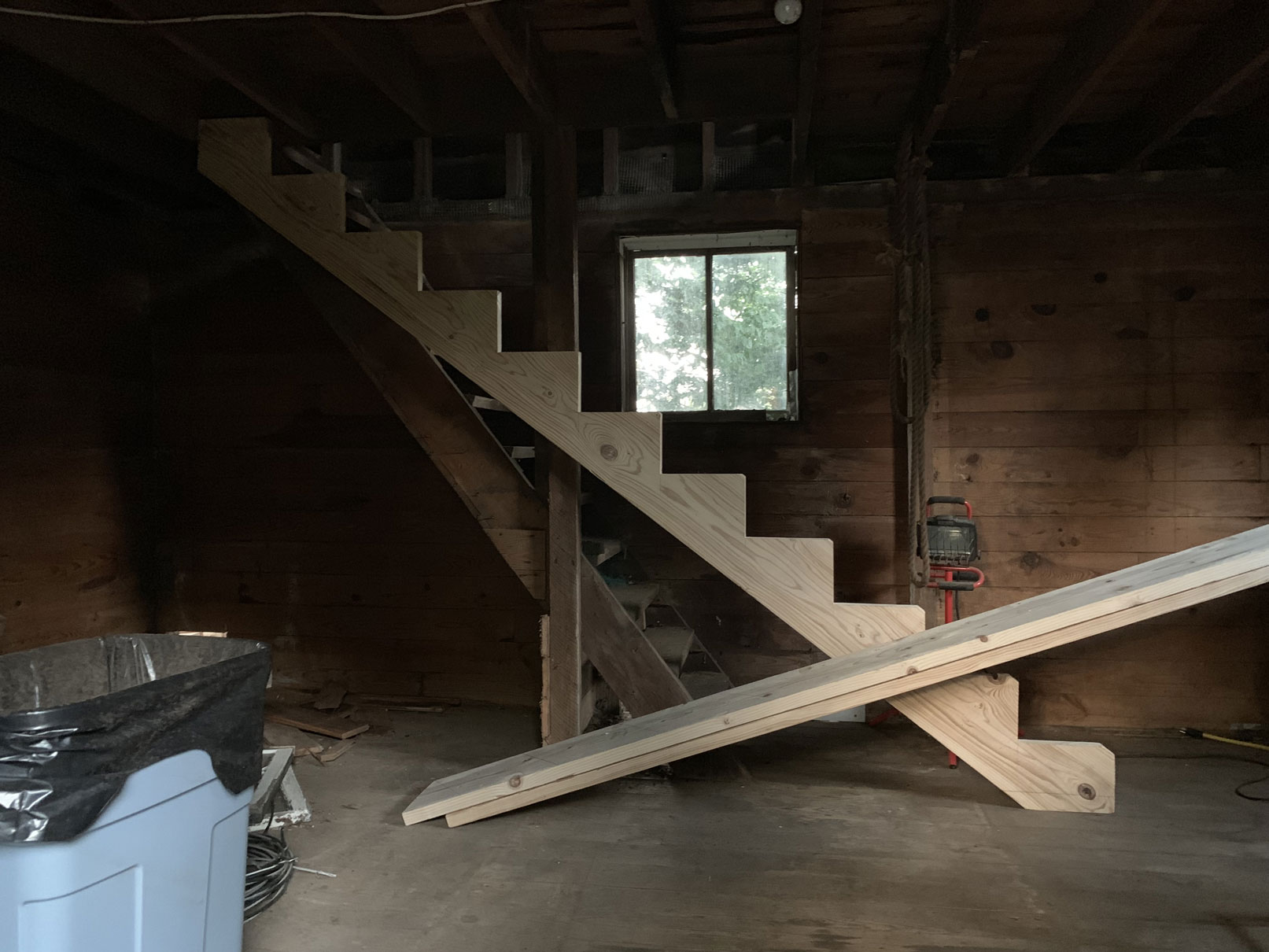 How’s that for a difference in rise/run? Now you see what we’ve been calling them the “death stairs” for so long. The old stairs were essentially a glorified ladder. And while it wasn’t a problem to go up, coming back down was downright treacherous. With the new stairs, a person won’t accidentally plummet face first down the stairs, unless they’re just bad at walking down “normal” stairs. The new stairway will be slightly larger than the existing ones, at 36” wide, which just barely slides into the code requirements for a modern staircase.