It’s been a busy month, with no signs of slowing down. Summer is finally into the 90s up here and it’s making me not want to work outside, like at all.

I’m not in the mood to sweat through a t-shirt most days, and any job in the granary ends up with me being covered from head to toe in dirt. It’s slowly getting cleaned out, but years of neglect is hard to come back from. And with the heat, it makes working out there pretty miserable. What’s more fun is that I have a nice a/c unit sitting in the garage, ready to use, but I can’t put it out there right now. Why? No electricity. It was wired up with electricity just fine, but since it was a drop from a pole on the greenhouse, it wasn’t particularly high in the air, and large trucks (working on the big barn) were routinely knocking it down. So, we took it down. That was in January. Plenty of time to dig a new line out there, right? Yeah, that didn’t happen either. Stringing a single extension cord over there (from the garage) every time I need to work out there is the way it’s been. Oh well.

I did, however, manage to get the stairs done before I melted: 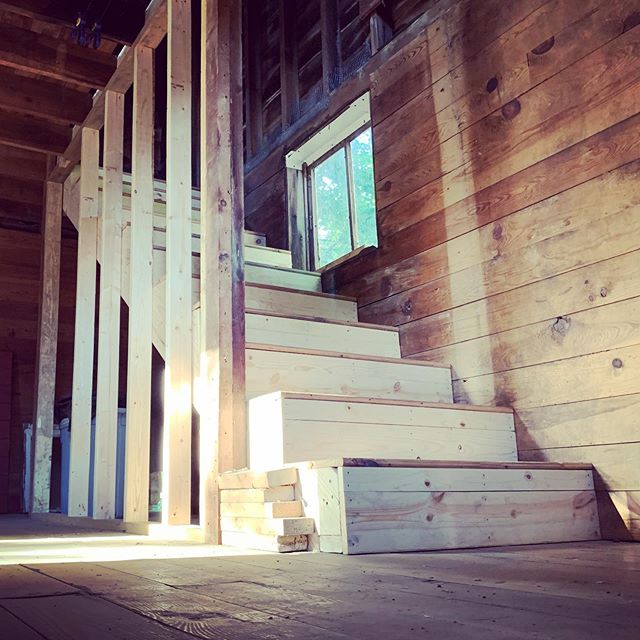 My office (in the house) has that sweet, sweet a/c… so I’ll be up here until it’s back into the 80s outside.

Other things floating out there

Here’s some stuff that I have in the works, some other random updates, and a few other quick thoughts on things rattling around in my brain:

Dropbox took a great big shit on their core client base recently and managed to make their desktop client mostly unusable. While I only use Dropbox for file sync, mostly, I did use it on most of my machines. Recently, (and I’m not sure exactly when) they started enforcing a 3 machine sync limit for free Dropbox users. I guess this might be fine for normal people, with a normal amount of devices, but I unfortunately don’t fall into that category.

Gruber has more thoughts on this that are, as usual, spot on. Plus other links to others with waaaaay more comments on the shitty Dropbox changes over at Michael Tsai’s roundup of articles here.

Now, I’ve been a paying Dropbox user for years. Awhile back, they sent me an email letting me know that they were going to wave my monthly fees and move me to the free tier. Probably because they were launching their larger 1TB/2TB plans, and I was paying something like $5/mo for an extra 10GB of space. Makes sense, and I really appreciated them doing something cool like that. And it was fine… for many more years. Competitors popped up, and I still stuck with Dropbox. It was one of the first programs that I always installed on a new machine.

Lately, I’ve been hesitant to even think about doing that at all anymore. I got a new Macbook Air in the winter, and I have still yet to install Dropbox on it. iCloud Drive has been fine for my simple needs on that machine, which is mostly a travel or couch computer. Yesterday, I noticed a new application had showed up in my dock - it was Dropbox, which had updated overnight. NOPE. Not cool.

So, I’m now in the process of moving anything automated (that puts files in my Dropbox) to other places and I will be finding a suitable replacement. That might be Google Drive, it might be something else. It might be a combination of services… I’m not sure yet. OneDrive, iCloud Drive, Google Drive, Box, SparkleShare, Nextcloud? We’ll see.

Man, I hate bookmarks. I hate figuring out where to save them, I hate searching for them, and I hate even thinking about it. But I have stuff EVERYWHERE right now and I need to make some sense of it. (There’s probably a metaphor for my life in there somewhere).

I’ll be writing up a long post on what I’m doing to make bookmarks suck less (for me) in the near future.

As I mentioned above, I’m still working on the granary. But we have several barns that need attention on the “compound”. I’m gradually updating the pages about the barns, their history, and what we’re doing with them as I get the chance. Those are right here if you’re interested.

If you didn’t know, I have a Jeep Wrangler. It’s pretty cool. I like it. That said, I haven’t washed the thing since February, so it was dirty. I’ve had the top off for awhile, so it’s not as simple as just running through the car wash and taking care of it real quick. I had plenty of plans to hand wash it in the driveway, but I never got around to it. Yesterday, I put the top back on and ran it through the car wash because I couldn’t stand it anymore. With this heat, it will be nice to not swelter in my own sweat when driving anywhere again.

As much as I like having the top off in the summer, it’s a pain in the ass sometimes. You have the constant worry that when you park somewhere, people are either going to throw things inside or steal everything not bolted down… This is with the doors ON too. Recently, myself and the family drove up to Michigan to grab some dinner. It was about 7pm when we left and it was 82 degrees. Pretty much perfect naked Jeep weather. But on the way back, it had dropped down to 74-ish. Couple this with driving 65mph on the highway and we were in windows up/heater on mode, on the way back. It doesn’t bother me, as I like it a little chilly, but it’s not the most family-friendly evening vehicle. But my kids still love it. Hah.

I’ll probably take the top back off next week again, but I’ll be working on my DIY cargo cover for the back, and will post up that process as I go through it. Along with that, I’ve got plenty of other car-related projects coming up (on the truck and the auto-x civic) that I’ll be updating too. Do I need a section for those things too? Probably.